Human body is an amazing machine (consisting of many different, interconnected machines) and I’m really curious about processes that happen in it. I also love measuring, quantifying and modeling things (as my wife can attest). So, I’ve been very excited to get my hands on the Libre.

Abbott FreeStyle Libre is a CGR (continous glucose recording) device, which measures glucose in interstitial fluid (a solution that bathes and surrounds the cells), or to say it another way the glucose in the subcutaneous fatty tissue. More info about Libre can be found in this diaTribe article.

I bought only the sensor without the reader, but thanks to CTAPP Software there’s a free Android app called Glimp, which can be used to read current values from Libre with a NFC equipped phone. I use Samsung Note 3. The sensor has to be activated first using another app called Glimp S.

Maybe now’s the time to mention that I’m not diabetic. However my father is, and apparently I don’t tolerate carbohydrates very well. So far my pancreas appears to work just fine. I have to keep it low carb (<130 g/day) if I want to maintain lean body composition.

I used Abbott Optium Xceed (with blood glucose strips) for comparison. I’m well aware that it’s not super precise either, but since it’s the standard used for insulin dosing it’s good enough for me.

I did 20 fingerprick tests in 8 days, and here are the corresponding pairs:

Some variations are to be expected, because the two devices measure different things and Libre only tries to convert its results to blood glucose equivalent. Also there’s an inherent lag (delay) of about 5-10 minutes for glucose change in the interstitial fluid compared to blood glucose. Still, the variation I see is too big to be used directly. I read that other users have better accuracy and even use Libre data for insulin dosing. Maybe it’s interpersonal variation or maybe my sensor is not up to par. Another possibility is that I didn’t insert the sensor at the best possible place – I used the back of the upper arm as advised but maybe I’ve hit some internal anatomy (blood capillary?). I also don’t know if Libre’s original reader is smarter than Glimp and compensates in some way.

So, here we go with some more analysis of the variation I see.

First, a diagram of the raw BG (blood glucose) pairs:

Libre often (but not always) reads about 0.5 mmol/l higher. Here’s the polynomial regression of the pairs: 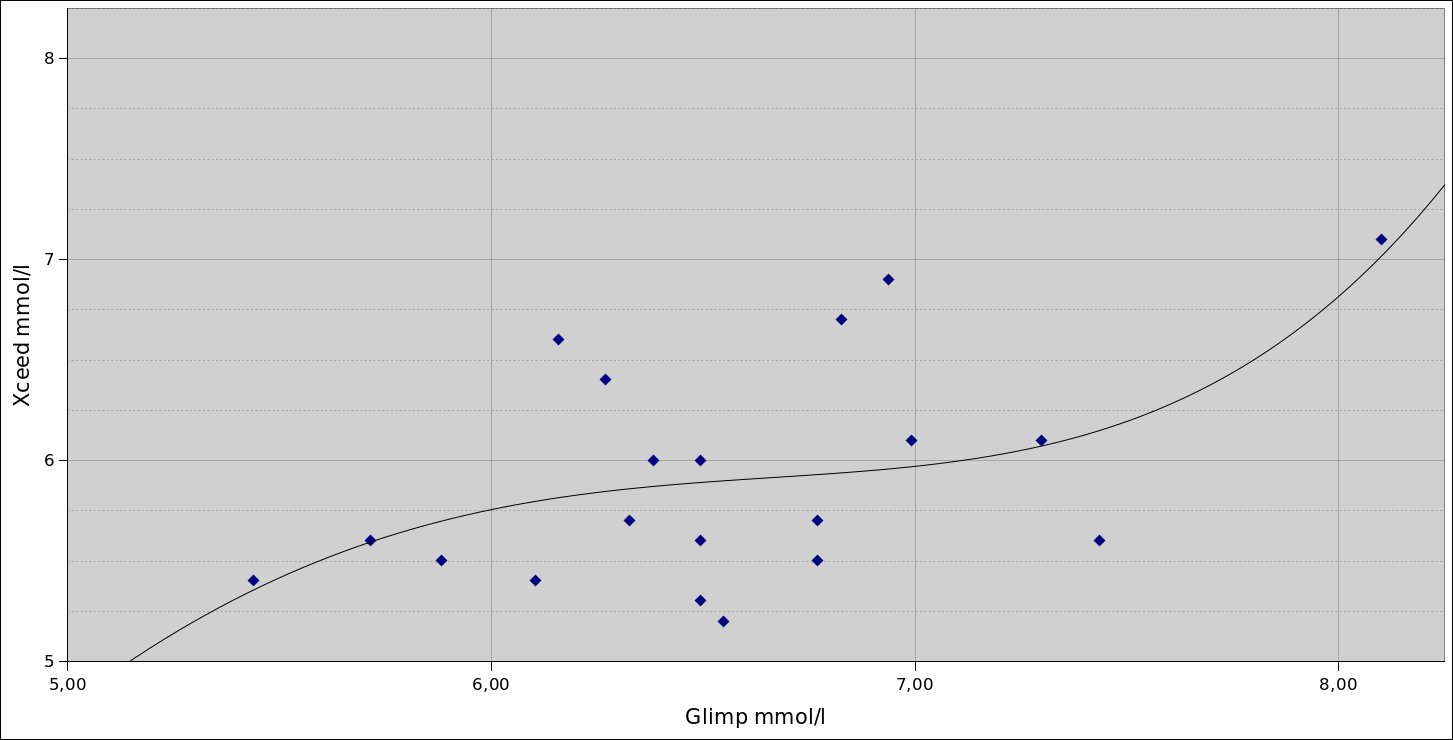 Seems like the higher the reading, the bigger the error.  Here’s the % deviation for all Glimp values I have: 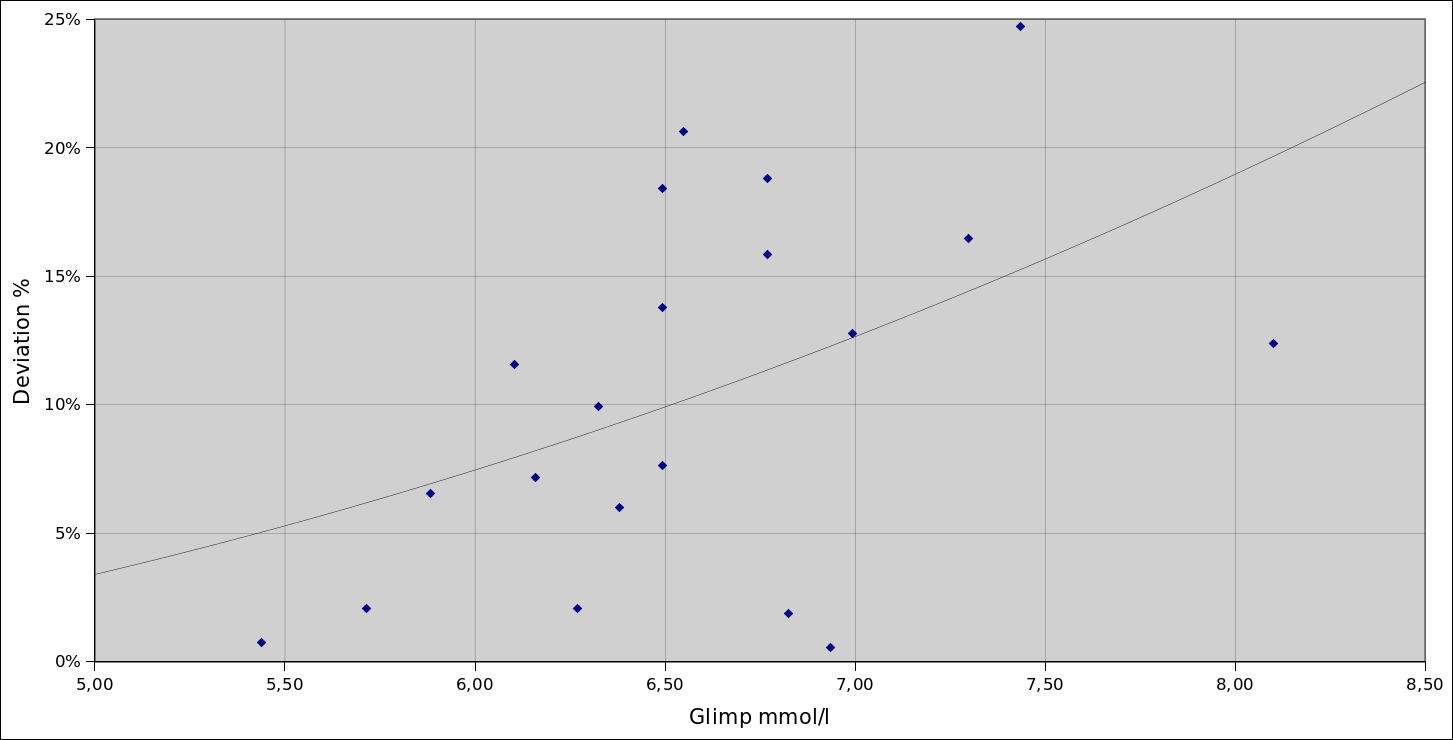 If I use the coefficient calculated in the polynomial regression above to adjust raw Glimp values and then calculate deviation, it looks like this: 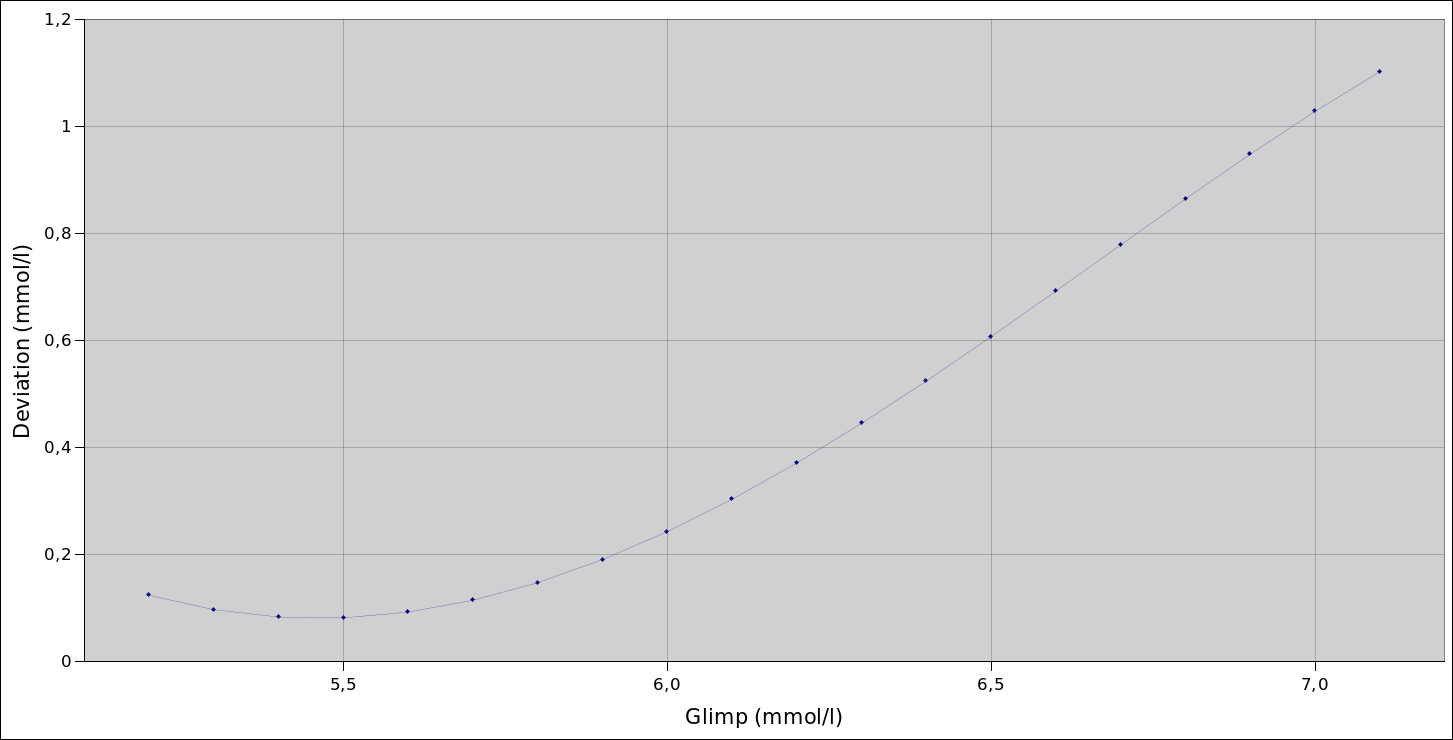 And finally this is how my adjusted blood sugar trend looked yesterday (probably :-)): 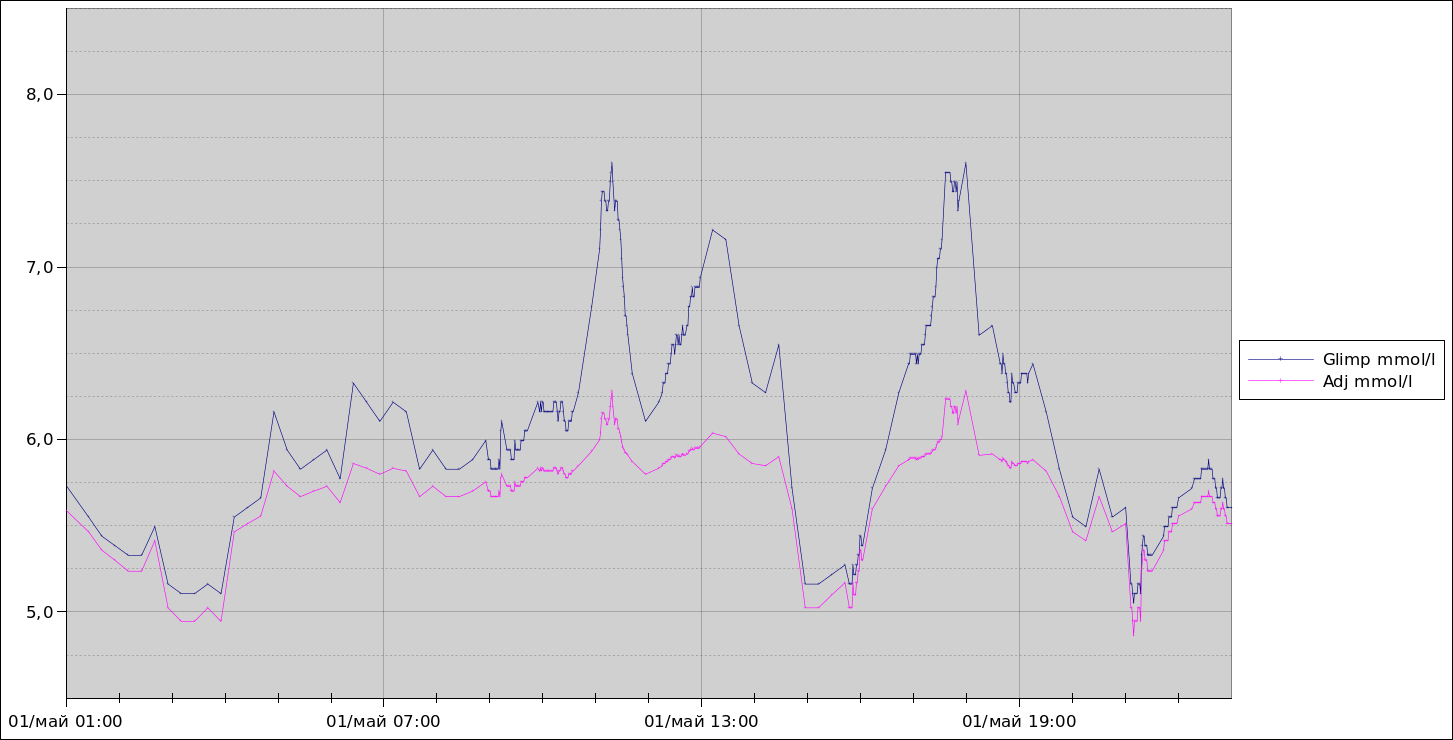 I have another unopened sensor and I plan to try it in a few weeks and compare data with this one.

This entry was posted in Misc. Bookmark the permalink.